He has created a niche for himself with his unique signature style of delivering highly motivational talks which mesmerizes and inspires his audiences to take action. Over the years, he has emerged as an authentic, dynamic and a leading Motivational Speaker in India and is getting popular worldwide.

Rahul Kapoor’s talks are beyond motivation and are highly inspirational. They create transformation of mindsets and ignites new thought-processes. His motivational talks inspires people to push boundaries and expand horizons. With his passion, dedication and wisdom he has not only earned a distinct position of being one of India’s Top Motivational Speakers but also a popular public speaker amongst the Jain Community Worldwide.

He inspires people to convert their excuses into results, potential into productivity and dreams into reality. He achieves these amazing results using unique combinations of science, psychology and spirituality.

Rahul Kapoor has raised the bar of public speaking and is listed under Top 10 Motivational Speakers in India. Whether he talks on mantras of success or philosophy of relationships his presentation captivates his audiences. His clarity of thought and power of expression are the distinguishing features of his stage presence.

His vast spectrum of his audience include business leaders, leading professionals across all sectors, film stars, sportsmen, teachers, students and a large number of participants from various communities across the world.

His talks are enriched with rich human values, embedded with in-depth philosophy and endorsed with powerful success stories. They contain the wisdom of Indian Spirituality and insights of latest research on human psychology. His audiences get drawn by the simplicity of his messages coupled with deep insight which inspires people to work towards excellence in all aspects of their lives. The testimonials of thousands of participants from his programs certify the impact his motivational talks create on their minds and lives to create a strong bias for action.

Rahul Kapoor's journey into the field of touching people's lives began when a series of life changing events touched his own life. He stepped into the arena of training people at a very early age. It was that time when corporate training and motivational talks in India were still in a very nascent stage. He adorned the role of a charismatic, enthusiastic trainer and at a point in time during the initial period of his career, Rahul Kapoor was recognized as one of the Youngest Motivational Speakers in India.

In 1998, at 20 years of age, Rahul Kapoor launched his first company Kapoor’s Workshop on Effective Communication and began his career as a seminar speaker. This was while he was still a student of post-graduate studies. Within 12 months he had trained over 1800 people which attracted the attention of India’s most read newspaper, The Times of India, which featured him in a special column ‘The Rising Sun’. Soon after that he was engaged by Manipal Hospital to train doctors in Intensive Care Units on interpersonal and communication skills, this placed Rahul in the big league straight away.

Apart from being an inspirational speaker and a corporate trainer, he has also earned the distinction of becoming a guest faculty for Indian Institute of Management, Bangalore (IIMB).

Inspired by Dr. A P J Abdul Kalam, Rahul Kapoor established a charitable trust in 2007 called 'Ignite India Initiative'. Its aim was to train and inspire 500,000 youth in India. In 2010 he launched Jain Youth Leadership Forum (JYLF) to spread-head the philosophy of non-violence.

Being an Indian Motivational Speaker, who speaks worldwide, Rahul Kapoor has touched his audience phenomenally with talks on peak performance, teamwork and relationships besides transforming lives of thousands of people with his inspirational talks and interventions.

He has also inspired a great number of people with his writings. He has penned two self-help books: 'Work Wise - Lessons in Excellence for Young Professionals' and 'Dad & I - Inspiring Stories for Teens'.

He has been a column writer for Education Times supplement of The Times of India newspaper. His inspiring column, named 'Work-Wise' was very well received across India. 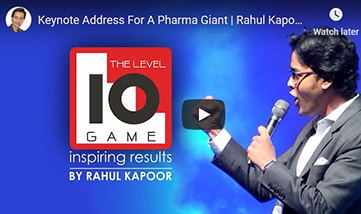